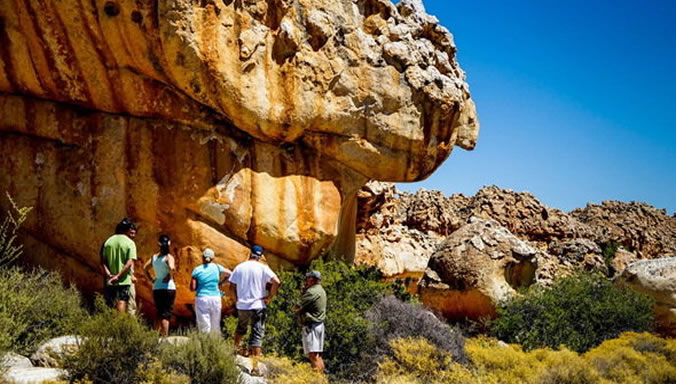 Located in the harmonious southern Cederberg Mountains within a historical area that previously offered refuge to ancient Bushmen straddles Kagga Kamma Private Game Reserve one of South Africa’s most tranquil protected areas. For memorable safaris in Africa, count this destination a must to include in your bucket list this and you won’t regret it in life. The reserve is dramatically famous as a spiritual site that features the most spectacular rock formations, bushman paintings, mountains, and breathtaking sceneries. This tranquil Western Cape Reserve boasts of its scenic beauty, cultural heritage, and flowers. There are several Bushman or San rock paintings/rock art that dates 6000 years. Kagga Kamma Game Reserve offers refuge to several wildlife species most of which include Kudus, Blue wildebeest, Gemsbok, Bontebok, springbok, grey rhebok, klipspringer, elands, Burchell’s zebra, leopards, aardwolf, caracal, black-backed jackal. The key bird species for you to look out at this reserve include Kori Bustard, Namaqua sand grouse, ostriches, secretary birds, and many more. This protected area is perfectly visited for its serenity, bird watching, hiking adventures, quad biking, game drives/game viewing both during the day and at night, cultural safaris, star gazing, spa treatment, conferences, and weddings, 4 by 4 trails and many others.

Kagga Kamma Private Game Reserve can be reached via the Cape West Coast, Cape Wine lands, along the 62 Route the Garden Route of the Western Cape in South Africa. It is approximately 250 kilometers which is three hours’ drive away from Cape Town and it straddles along with the Swartruggens range of the Cederberg Mountains that divide the Koue Bokkeveld from the large Karoo. You will take the N1 north and around Worcester, you turn off to Ceres. At Ceres, take the route to Prince Alfred’s Hamlet and Citrusdal. After crossing via Prince Alfred’s Hamlet and Gydo pass, turn your right at the Kagga Kamma sign after Op dies Berg. Turn on your right at the near Kagga Kamma sign after approximately 18 kilometers and from this point, the roads are in a good state. You then take your left in another Kagga Kamma signpost after 19 kilometers and you will reach the reserve’s entry gate after 15 kilometers.
By air, there is Aanloopbaan runway for private Aeroplanes but usually not used as such as there are animals that roam around it. Before making a flight, make sure that you consult authorities to find out more about its safety.

Where to stay in Kagga Kamma Private Game Reserve

Kagga Kamma Private Game Reserve has a wide range of accommodation options right from chalets, private lodges, cave suites, and others. The key ones include the Bushmen Lodge and Outcrop camp luxurious facility which rewards with the amazing wilderness of the reserve. The Bushmen Lodge has a hybrid power system for both diesel generators, solar power. It is 5 luxurious en suite thatched rondavels which are ideal for families and children or in 10 rare and special cave suites set against the sandstone rocks peacefully blending into the surrounding landscape. The cave suites feature private terraces, king-size beds/twin beds, en-suite bathrooms, restaurants, bars, and others. The Outcrop Open Air Camp is set on the rocky outcrop away from the lodge and visitors are rewarded with amazing experiences

The summertime at this reserve falls between December and February and can be hot with minimal or no shade. The winter season starts from June to August and it fluctuates from mild to very cold with frost and at times with snow in its higher areas.