Akagera National Park is a protected area in the eastern part of the country along the international border with Tanzania. The 433 sq mi and was established in 1934 by the Belgian government which was colonizing Rwanda by the time. 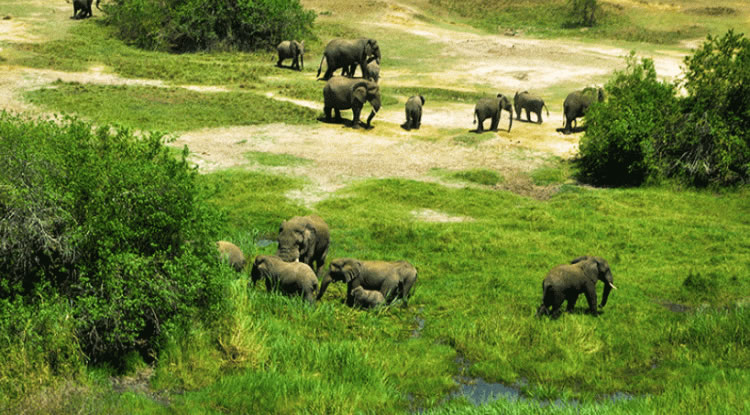 The park is home to a variety of wildlife in Rwanda and is known for being the smallest and the easily reached national park in the country because it’s found in just two and half hour drive (120km) from Kigali the capital of Rwanda. The managed is by Akagera Management Company – a joint entity between African Parks and the Rwanda Development Board (RDB). Akagera National Park was named after the Akagera River which flows along its eastern boundary and feeds many small lakes and of which the largest is Lake Ihema.

The montane, swamp, and savannah in the park offer a perfect habitat for a variety of wildlife species which include over 500 species of birds the thing which make it a perfect destination for bird lovers. Still, there are other wild animals that can be spotted in the park for example buffalos, elephants, zebras, giraffes, hyenas, leopards, lions. The park also harbors a variety of antelopes like bushbucks, Oribis, water-buck, Topis, roan antelope and duiker, klipspringer, impala, and the world’s largest antelope – the Cape eland.

What to do in Akagera National Park

A visit to Akagera National Park offers a chance to participate in a variety of tourist activities like; bird watching, game drive, boat cruise among others. 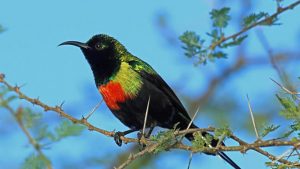 Akagera National Park is among the best birding destination in the region with over 500 different species of birds which can be spotted on a guided nature walk, on a game drive, or when you on a boat cruise on River Iheme.

Game Drive in the park 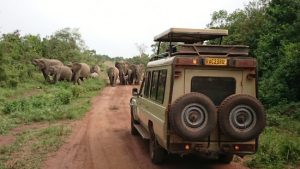 When it comes to game watching, Akagera National Park is among the best destinations with a variety of wildlife. The political conflicts of 1994 and poaching in the country have greatly reduced the population of wild animals in the park. With the restoration of peace in the country after the 1994 Rwanda genocide, the government is working hard to restore the lost wildlife. Currently, the national park is worth visiting due to the variety of wildlife in the park which includes; buffalo, elephants, zebra, bushbaby, crocodiles, hippos, and many other mammal species. On rare occasions, one can spot animals like; leopard, lion, and black rhino.

Most of the water-loving animals are always spotted while on a boat ride along Lake Ihema, the boat ride provides a clear platform for viewing and photography. While sailing on the lake, expect to see crocodiles relaxing at the banks of the lake, hippos, and others like elephants, zebras quenching their thirst among other activities. 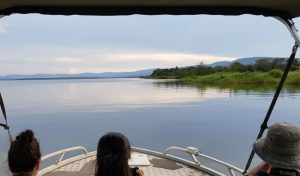 Akagera National Park is the only destination in Rwanda where tourists can enjoy sport fishing. It’s always done on Lake Shakan and it requires to book with the national park for sport fishing on the lake. Although the main aim is to catch and release, you always have a chance to take one catch for a meal in case you interested.

How to get to the park

The park is found in the eastern part of the country approximately 120km from Kigali south of Kigali the capital of Rwanda. The common way to access the park is by means of road transport where you need to drive for 2 hours. The entrance to the park is only through the southern gate the northern gate is now only used for exit.

Another option to access the park is by air using the services of Akagera Aviation for those who can seat in the vehicle for a 2-hour drive.

There are a variety of both luxury and budget safari lodges in Akagera National Park and among these include;